You can view the Rogers Park Chamber of Commerce October 2011 newsletter or sign up for monthly updates here.

Bishop James Alan Wilkowski has contributed to our community through his work as a pastoral leader and treasurer of the Rogers Park Chamber of Commerce. - Bill Morton

Posted by Rogers Park Chamber of Commerce at 12:17 AM 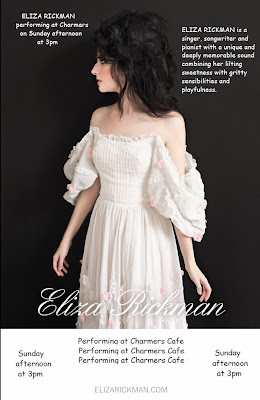 Eliza Rickman's unique and haunting sound combines the lilting sweetness of popular vocalists like Feist or Annie Clark with the gritty sensibilities of PJ Harvey and the playfulness of Kurt Weill.

Eliza recorded her first full-length effort this past winter with Chicago-based engineer Mark Greenberg (Andrew Bird, Wilco, Mavis Staples). It was funded by a wildly successful Kickstarter campaign during her nationwide spring tour,... when over $12k were raised (out of a $6k goal). The album is anticipated for release in the fall of 2011, and highlights Eliza's talent for writing string arrangements, and includes contributions from percussionist Kevin O'Donnell (Andrew Bird's 'Bowl of Fire') & bassist Tom V. Ray (Neko Case, Jakob Dylan).

Two stunning music videos were made in 2010 with Mindfruit Films for songs off her toy piano-based EP, 'Gild the Lily' (2009). The first video ("Cinnamon Bone") was completed in the spring, and is a reverse effect, slow motion short film about a young woman reliving her heartbreak through the seasons. All effects for the video were analog only, and this unique concept landed "Cinnamon Bone" a spot at 2011's SXSW Film Festival. A stop-motion video for "Black Rose" was released six months later.